In 2016 Antwerp’s skyline changed with the building of the Port House by world renown Zaha Hadid Architects. This architectural jewel brings together the past and the future: a port with a rich history that is ready to face the future ahead.

You could also say a space ship landed on a 16th century Hanseatic House (did i say that out loud?) 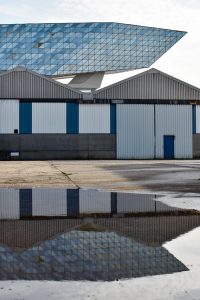 The new building symbolises the dynamic, ambitious and innovative nature of the Port of Antwerp. And it also shows some guts to put an eccentric building as a symbolic gate between the city and the port. Well, we are Brave Belgians after all and a daring landmark fits in a city like Antwerp.

The extremely modern glass superstructure of 450 glass panels gives the building a sparkling appearance like that of a diamond. A symbol of Antwerp’s role as the major market of diamonds in Europe. The surface ripples like waves and reflects the changing light and colours of the city, the water and the port. The building carries a powerful sensation of movement through these reflections. Even seen from the ring road a kilometer away, it looks like it reflects a thousand glistening waves.

My spellcheck kept changing Zaha in Haha, how aggravatingly (not) funny… 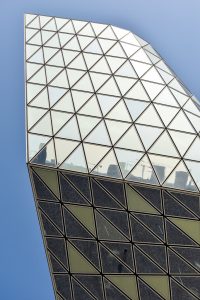 Try to spot yourself in the reflection, it’s fun!

Dame Zaha Hadid, who died unexpectedly a couple of months before completion of the building, is known to give geometry a whole new identity: a fragmented geometry with multiple perspective points in this case.

One of Zaha Hadid’s first projects to be built was the fire station at the Vitra factory in Weil-am-Rhein (Germany) which ended up being used as an exhibition center. In the architectural competition for the Port Authority, there was only one rule: the original building, an old fire station (a protected replica of a former Hanseatic house) had to be integrated in the new project.  Her first and last realisation are that way connected.

She was the first woman to win the Pritzker Architecture Prize in 2004, which is somewhat like the Nobel prize for Architecture. 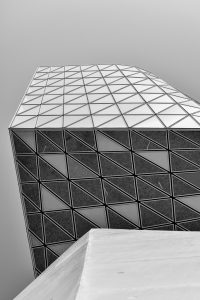 The flat facade at the south contrasts with the rippling surface at the north of the building.

The unconventional, slightly strange and quite extravagant appearance calls for strong opinions in the like/don’t like camps. 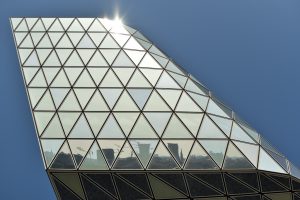 Is it a bird? Is it a plane? No, it’s Superbuilding!

The appearance of the building is never the same! The game of light in the reflection of water, sky, city and port is utterly fascinating.

To Be Continued: i’ll make sure i get to visit the inside of the building. Besides the cleverness of the inside, i would love to see the view of Antwerp and the port from right up there.

If you are like me and the name of Dame Zaha Hadid sounded familiar, but you can’t picture any building, do check out Zaha Hadid Architects website, it’s amazing http://www.zaha-hadid.com/archive

ps:  in case you wonder Zaha is not related to Gigi.

This site uses Akismet to reduce spam. Learn how your comment data is processed.