The trip i took to Dubai was surprising.

First of all, because i hadn’t planned to go.

A dear friend of mine urgently needed a brake from work, remoddeling a house and small children. She called me one day and sounded  desperate to find a place to go to A.S.A.P. Instead of letting her go just by herself, i volunteered to join her somewhere for a few days. (Yes, i’m that kind of friend.)

I was honestly thinking a spa weekend nearby. But we both love travelling, so, while still on the phone, we started googling simultaneously on weatherforecasts, distance and plane tickets (yiha for momondo). Two hours later we had planned our trip: Dubai it was. The weather would be nice (24C) and the 6 hour flight was quite allright. The spa experience was replaced with a few days by the pool in a sunny country, when at home it was freezing: sounded really good.

Out of curiosity i checked some guidebooks such as this one, blogs and instagram for things to do in case reading books while sipping cocktails in lounge chairs would get boring. I love marking things in google maps with stars and lists and saving the map of a city offline. It’s extremely easy when walking around somewhere to find nearby labelled places and decide on what to do or not. I marked all sorts of hotspots, landmarks and foodspots which would help out if needed.

Off we went a week later to spend four days in Dubai.

The second surprise was that we ended up not spending fifteen minutes at the pool. Quite surprising for a supposedly pool vacation.

We did go to the beach one afternoon, that’s true. But it was quite windy when we were there, so not the perfect beach bum weather. But above all: there was so much to see and do! 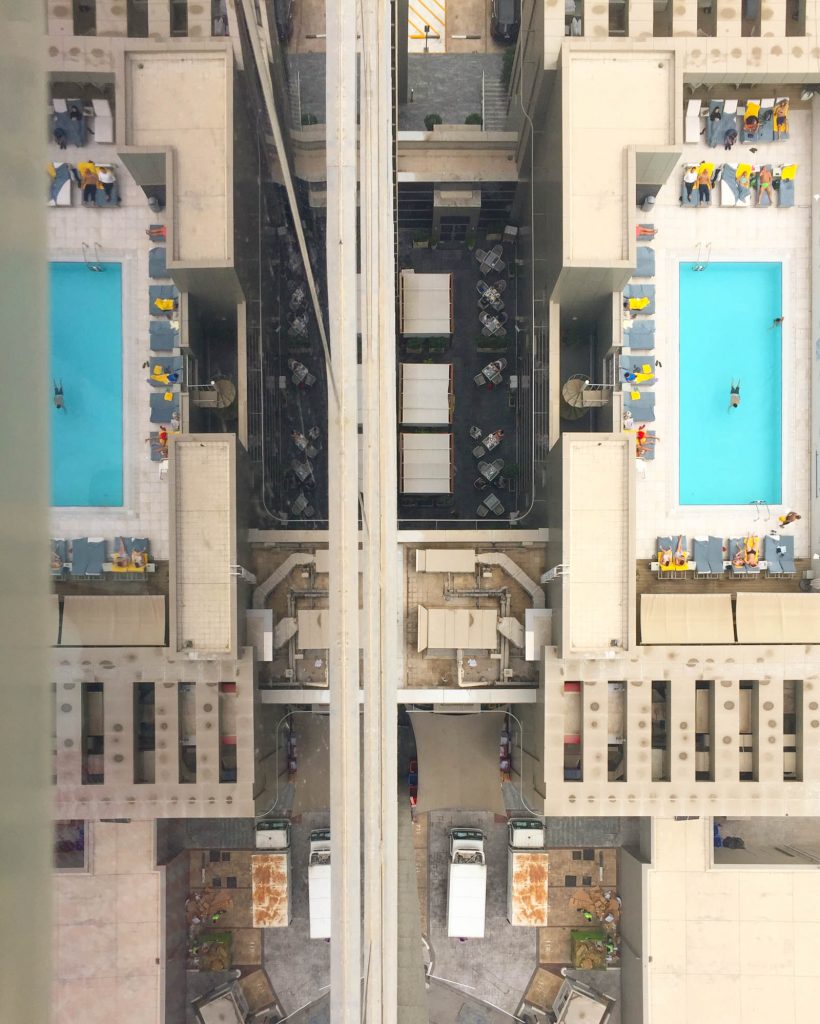 View from our window down on the hotel pool at the Wyndham Dubai Marina Hotel. 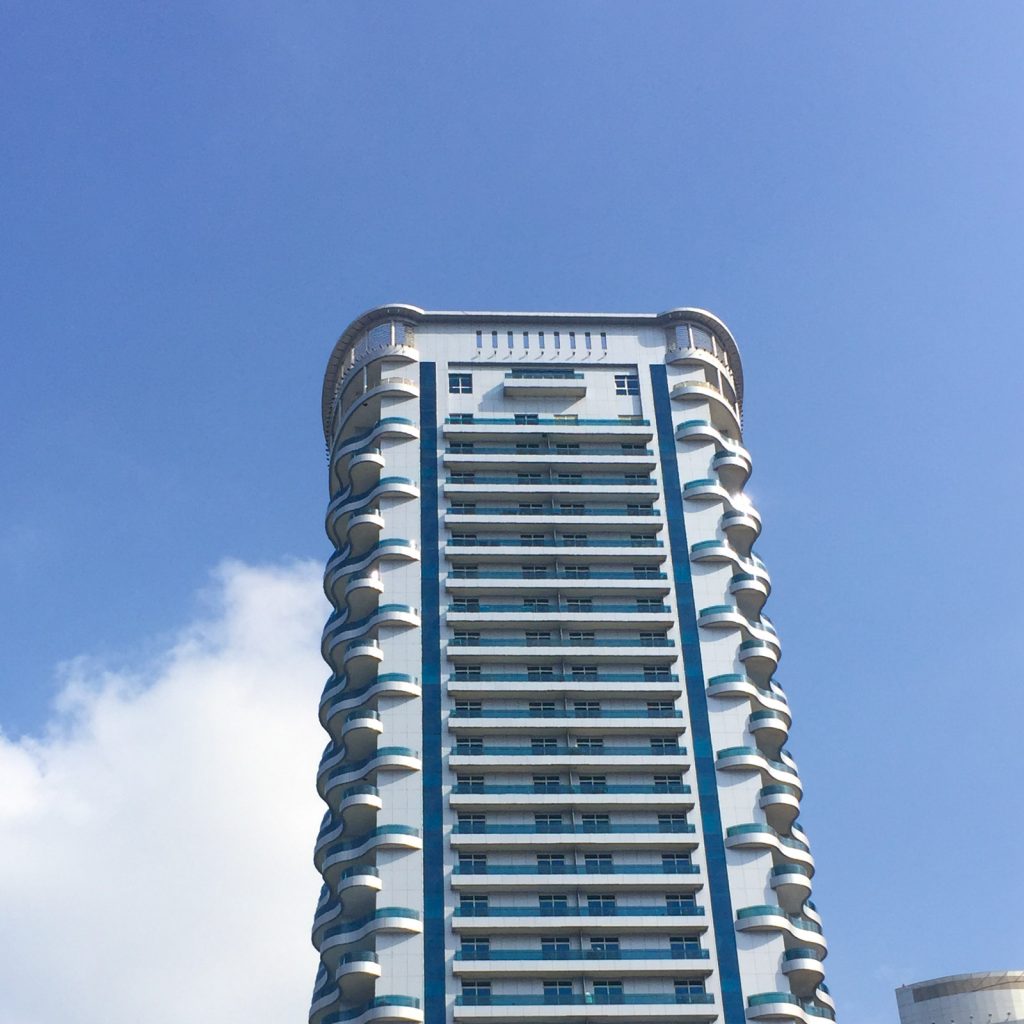 Dubai Marina – The Marina is surrounded by original architecture of all kinds. Most of the buildings are hotels. This curvy one particularly caught my eye. Made to stand around water with its waves all around.

We took the Metro, which was a 10 minute walk from the Hotel, all the way to Bur Dubai. I say all the way, because the city spreads out over more than 30 kilometers! We strolled around the different souks: it feels real in there. A rainbow of color in the Textile Souk filled with the softest cashmere scarves. All the spices you can think about in the Spice Souk. They are not sold in little jars, but presented in heaps of colorful and wonderfully smelling powders. And if bling bling is your thing: feast your eyes at the Gold Souk. Wandering around in those areas takes you far away from home in no time. The only annoying thing being that you can’t look at anything, let alone touch it, without the hustle. Every salesman wants to sell at any given time. 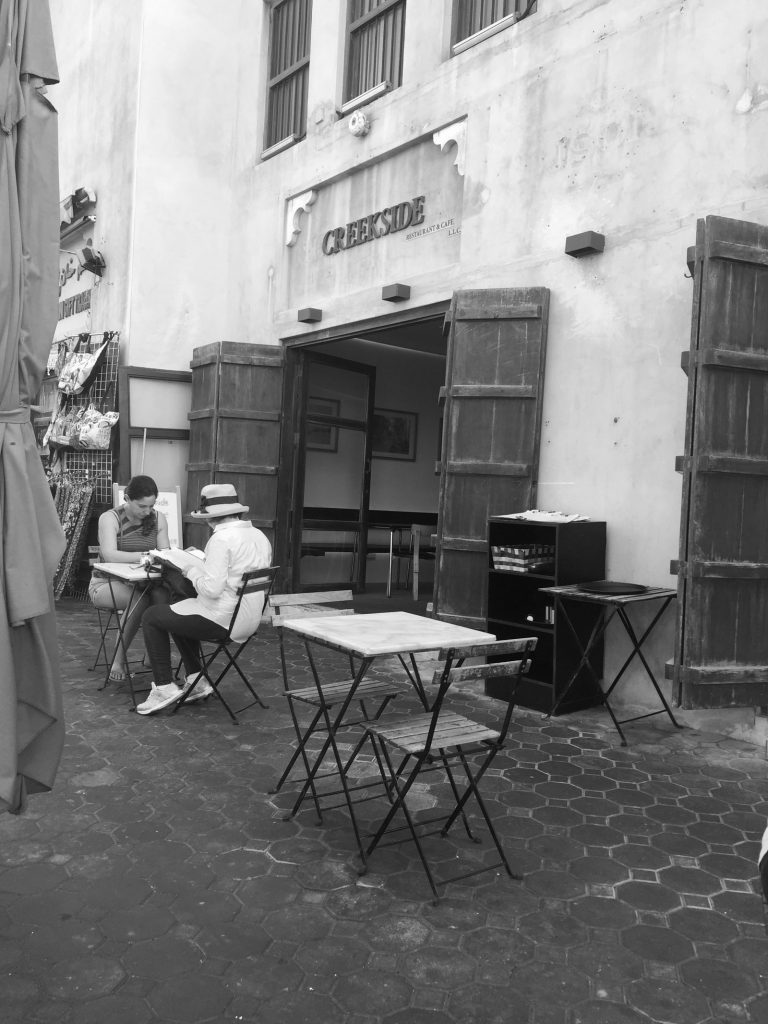 Bur Dubai – The Creekside Cafe is the perfect spot to watch the activity on the creek and enjoy a nice lunch. 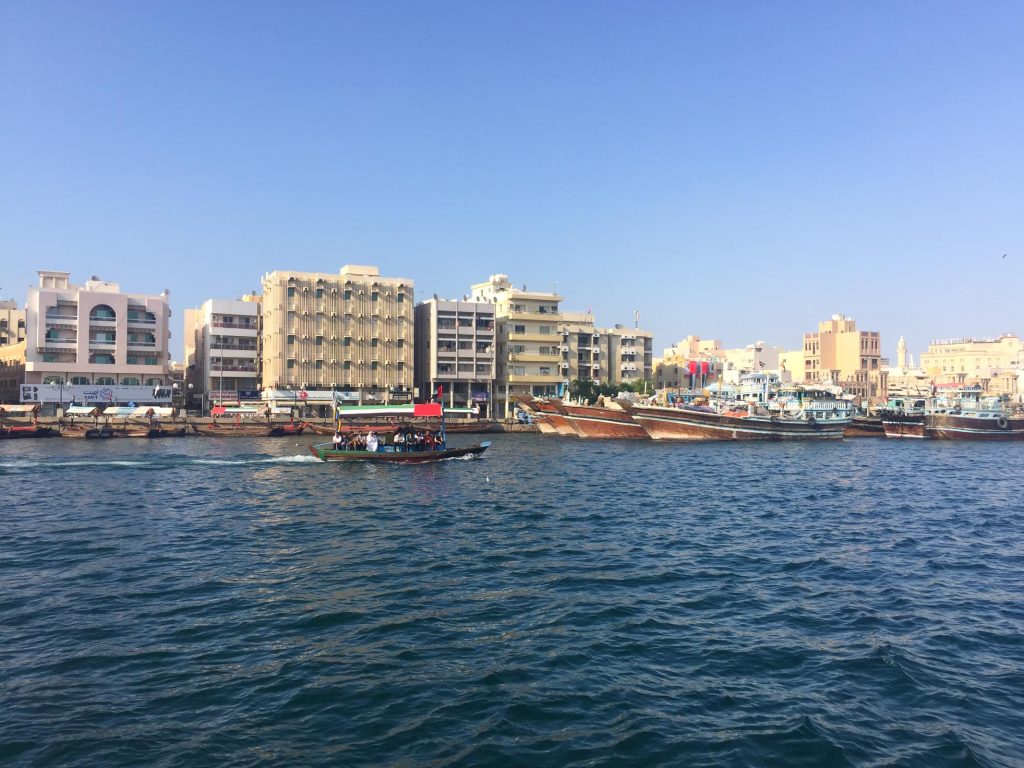 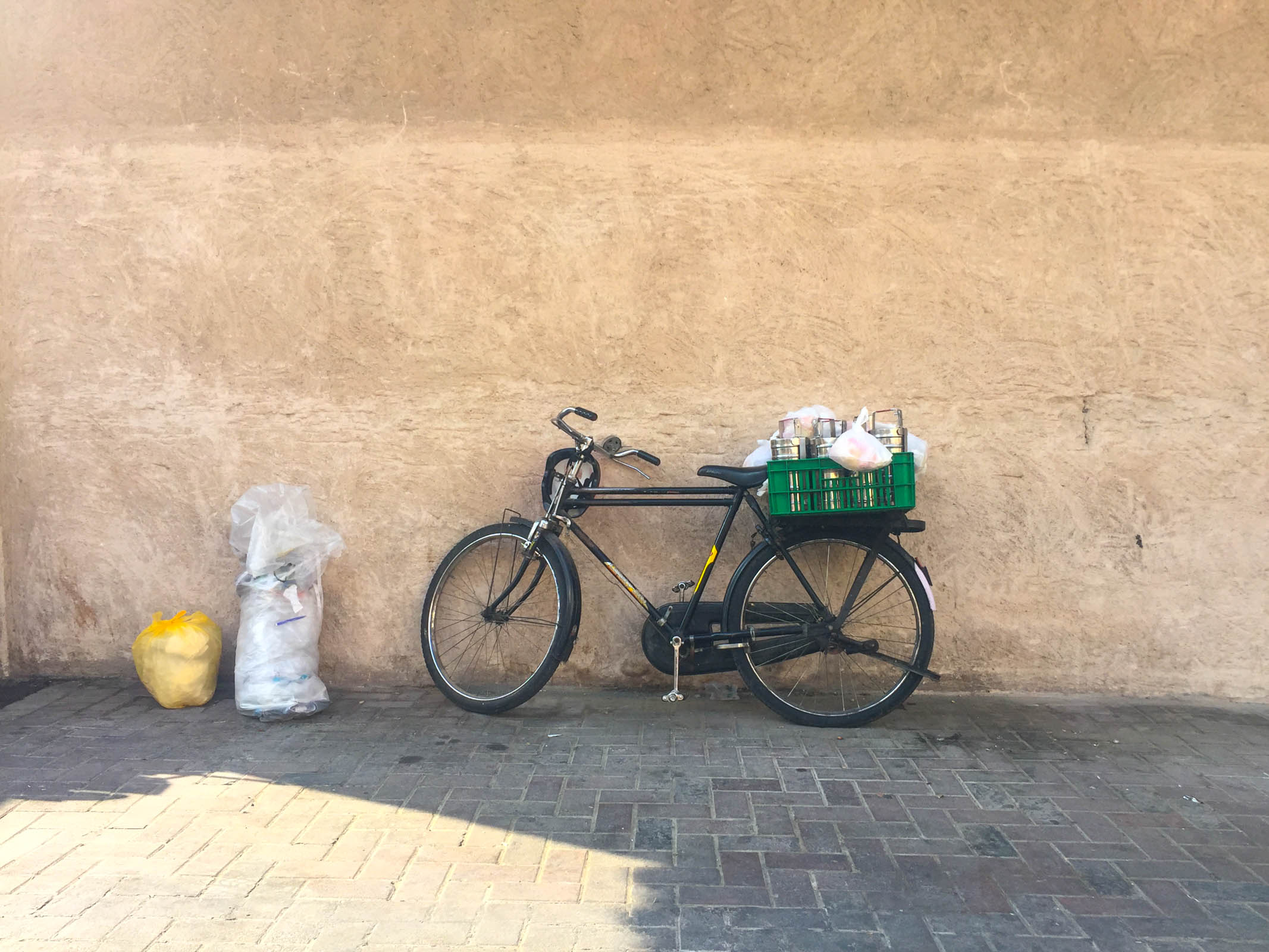 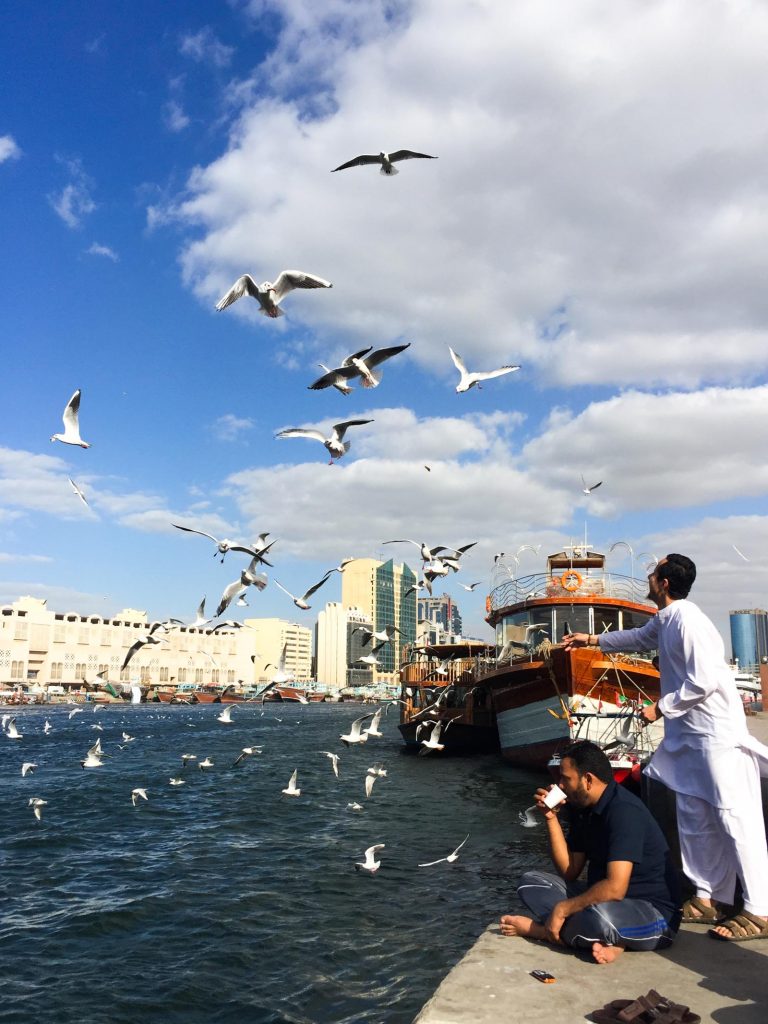 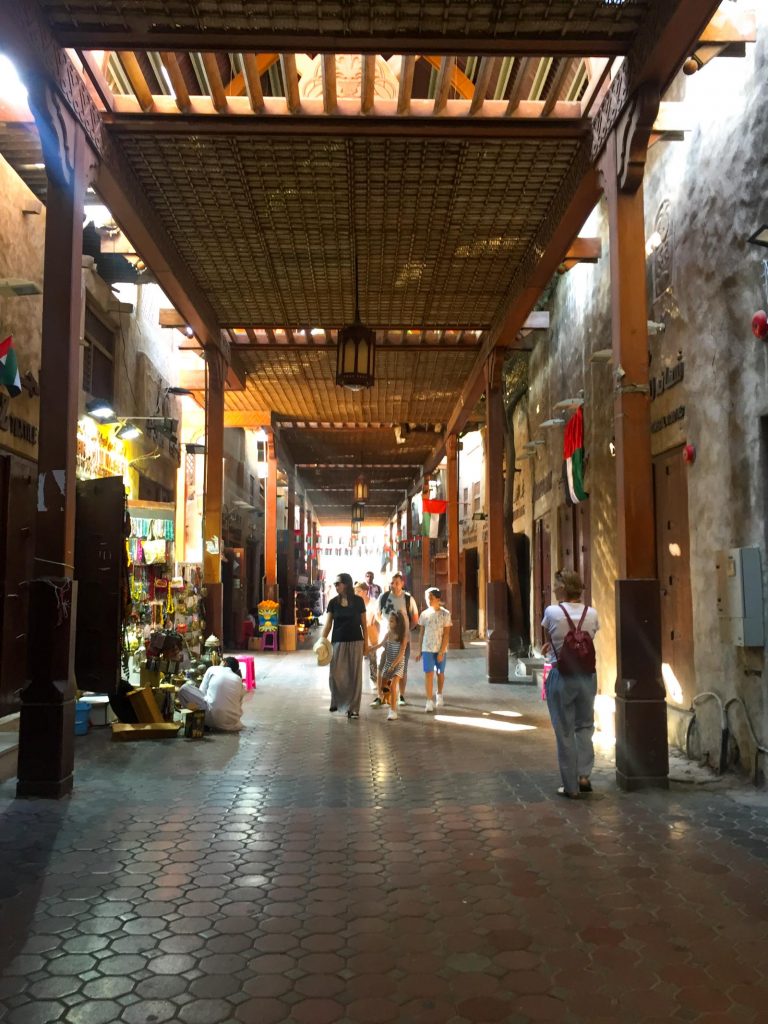 Bur Dubai – Textile Souk: delightfully in the shade with rays of sun occasionally seeping through. 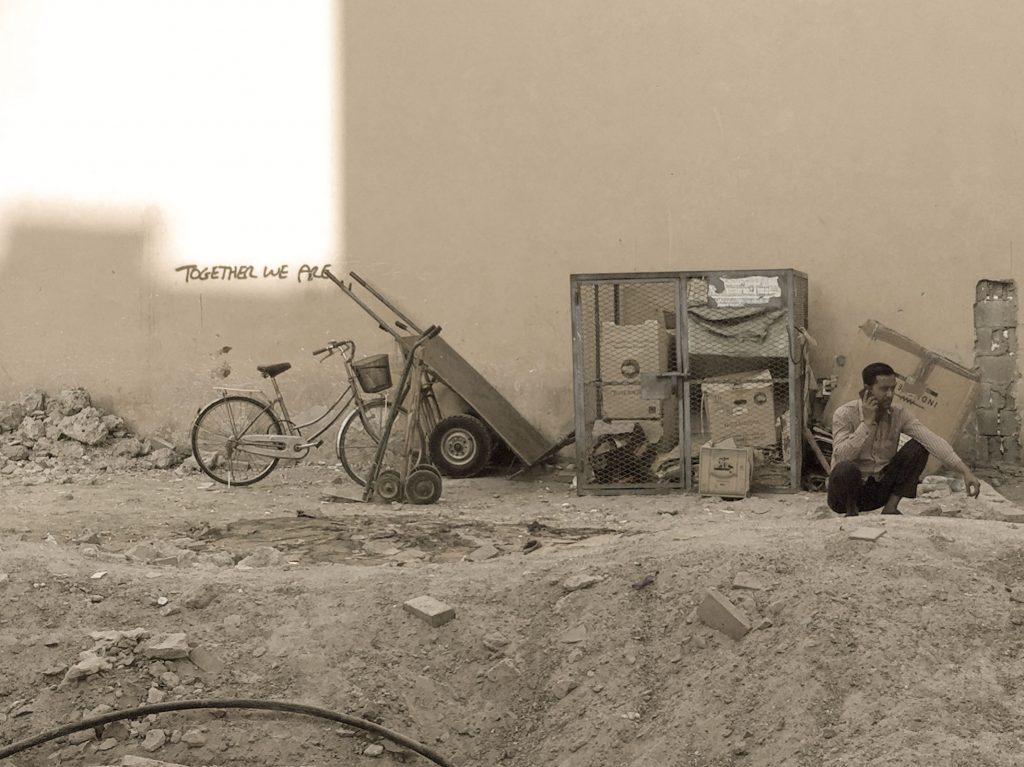 Deira – Small street under construction between the Perfume Souk and the Gold Souk. The ‘TOGETHER WE ARE’ tag is pretty much the only one i saw in the whole city. 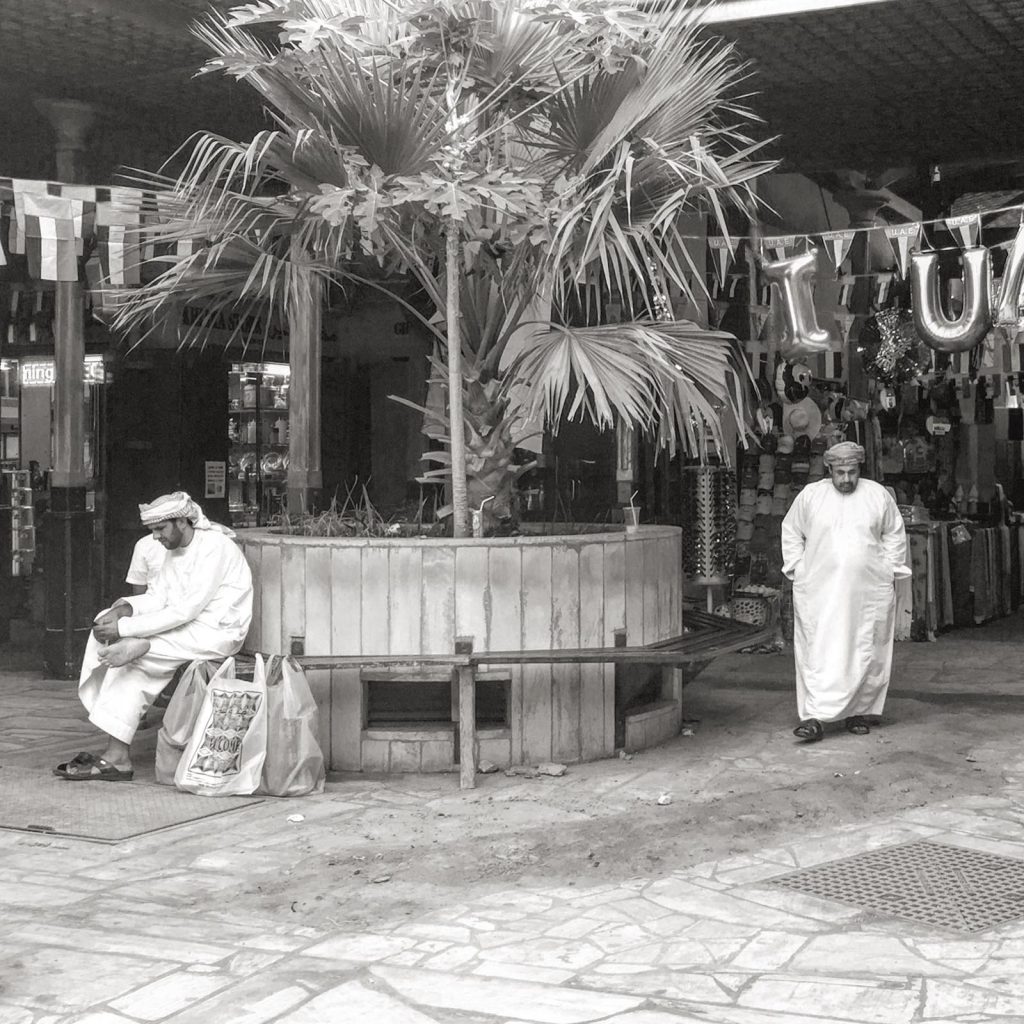 The second day started off with a visit of the Dubai Mall. We were not really into shopping, but you can’t miss the biggest shopping center in the world. It has a gigantic aquarium in the center and over 1200 shops! You just don’t know where to start. And Dubai might be tax free: shopping is still expensive since everything is imported.

The Burj Khalifa is just crossed the street and was defenitely an attraction we wanted to do. We climbed, well not really, we wooshed, all the way to the 125th floor in 50 seconds and indulged in the amazing 360 degree view of the city. At 456m above sea level that is quite something. It especially shows how vast the city is, how close to the desert is and how much construction is going on everywhere! 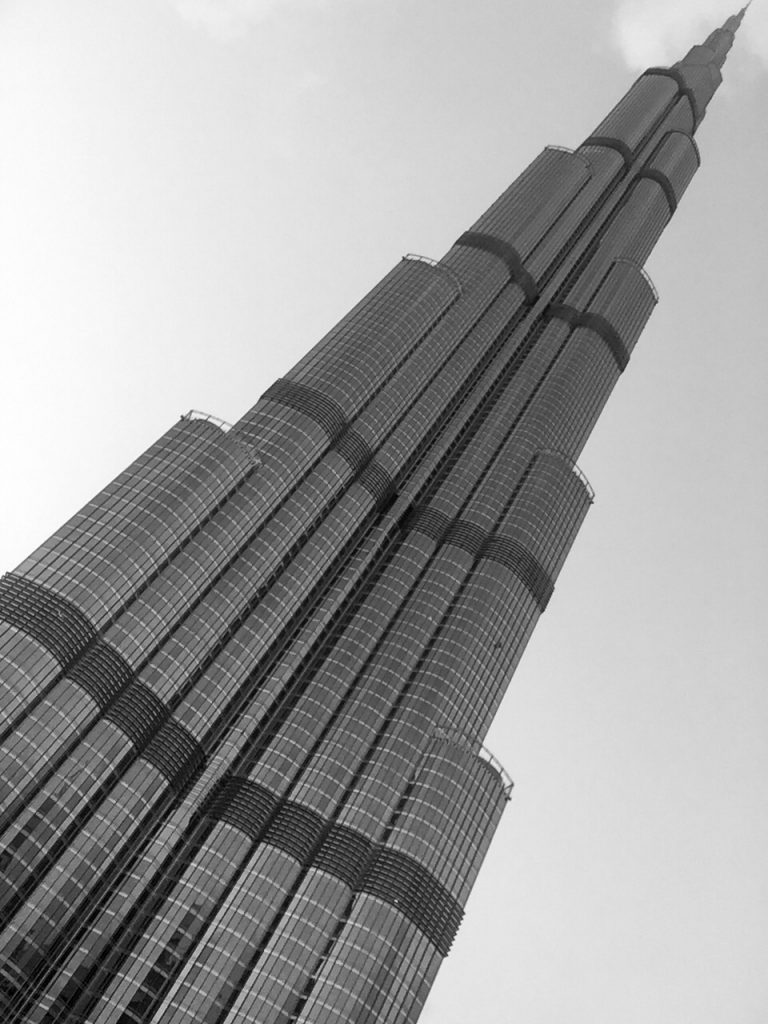 The Burj Khalifa is a master piece of architecture inspired by the desert flower Hymenocallis. Like petals from a stem, the tower’s wigs extend from the central core.

From there we dwelled around a bit to go to the Alserkal Avenue Galleries. The place looked close to the metro station, but it wasn’t. So we ended up just after sunset (which is around six) on dusty roads trying to find our way. Thank goodness for offline Google Maps! We were in for a good surprise there too: an industrial compound transformed in a bustling contemporary art hub. A whole range of art galleries, studios, coffee shops etc in a very trendy jacket.

Nothing to do with the souks we visited just the day before.

The souks feel like a trip to the past, slow life. Here, things are happening! And the art is very contemporary.

Unfortunately everything closes at 8pm, so we couldn’t try any food. 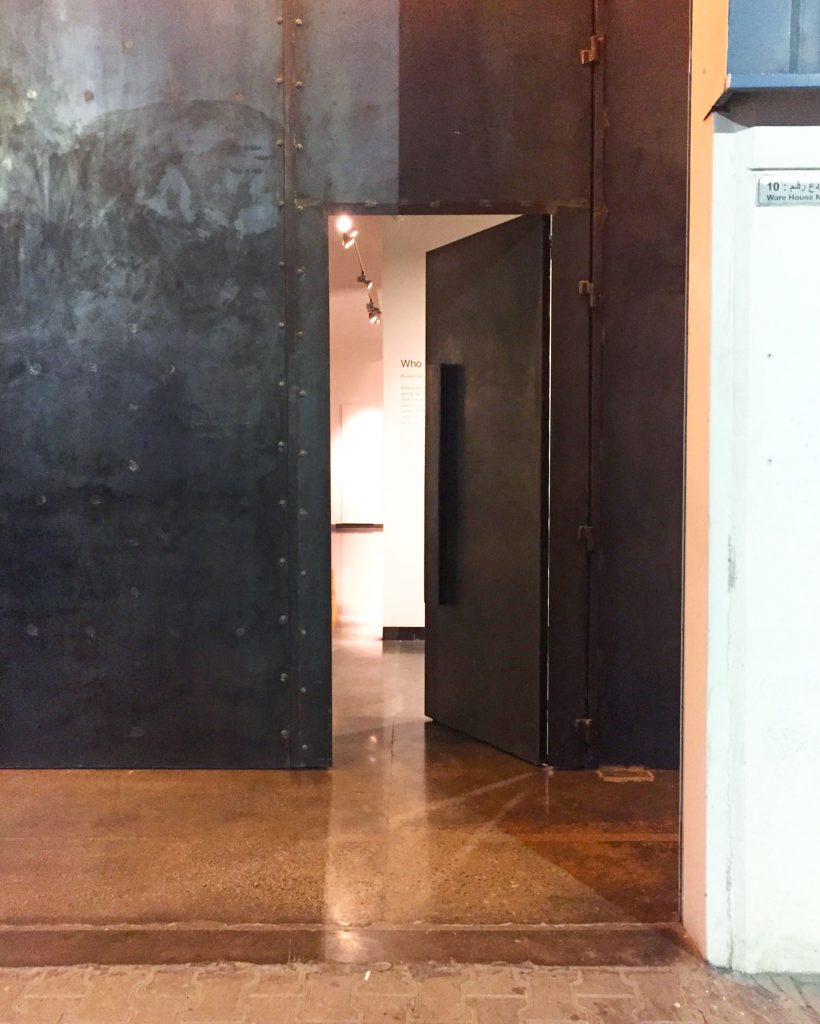 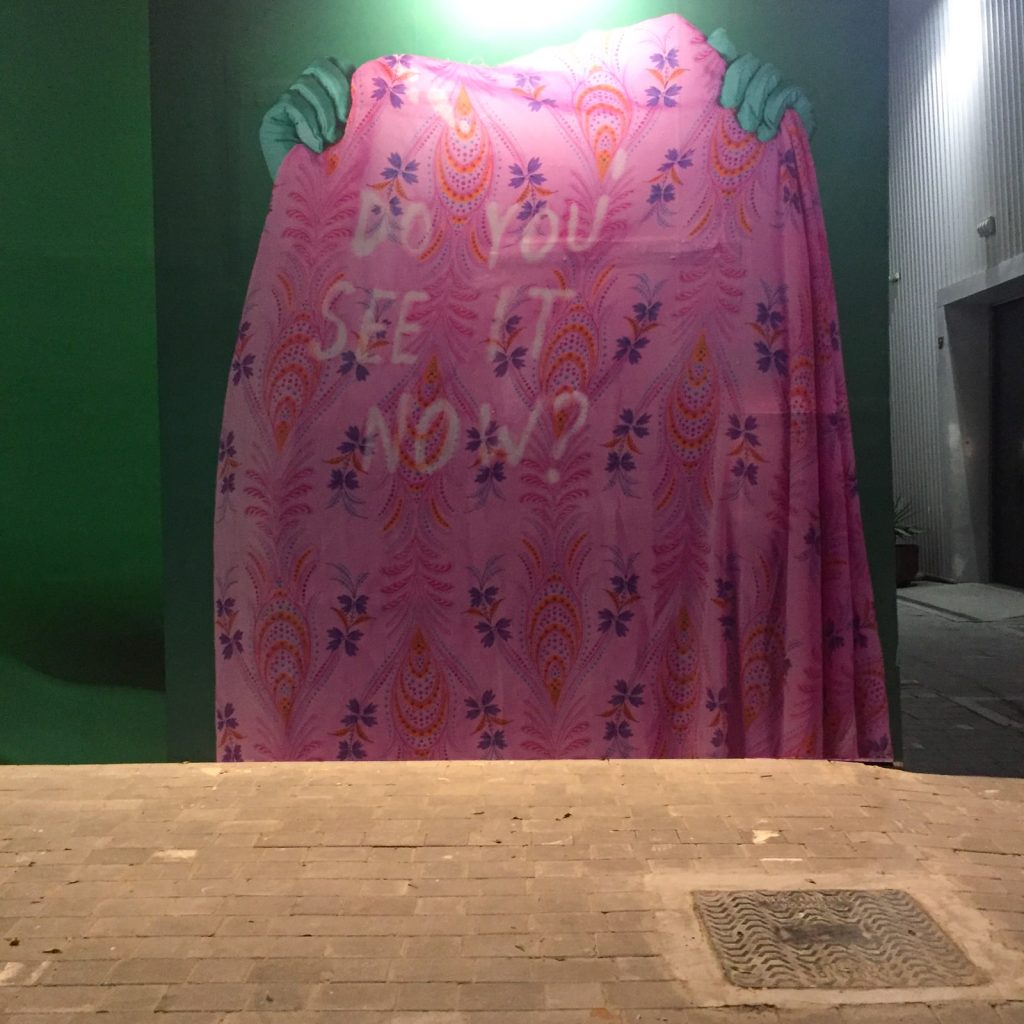 A taxi took us to the Beach where there are lots of restaurants and chose a nice sushi place. The Dubai International Film Festival was on while we were there, so we caught part of The Red Turtle on the open air beach cinema screen. Sort of like watching tv before going to bed, but then differently 😉 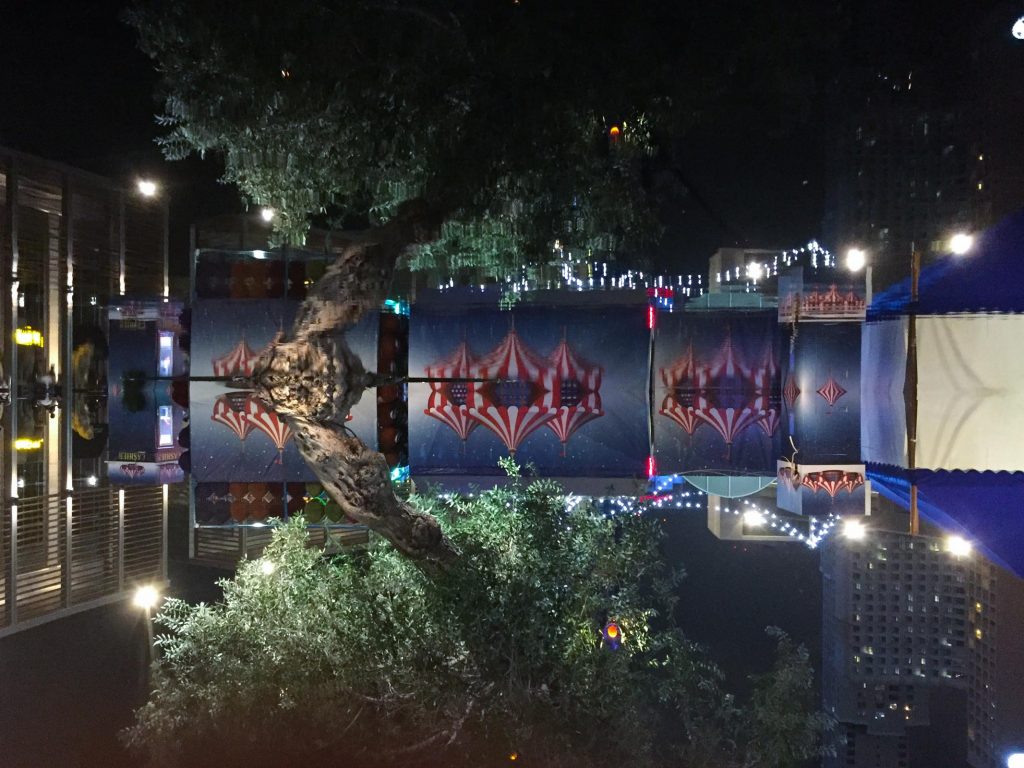 Dubai Marine Beach – I’ve never before succeeded in taking such a successful reflection picture as this one. I flipped it upside down for extra effect, but you might not notice since the water was so still.

Another beautiful day of blue skies and a slight breeze under the sun. Being in this climate in early December, when at home it’s almost freezing is extremely pleasant. It did not require a lot of acclimatisation on my part.

Since i am a big street art fan we had to go to The Dubai Walls. They are located in yet another shopping mall, but this one is more of an open air walking area with big murals coloring up the place. All the art work by sixteen renowned artists was commissioned with the idea of sharing this exciting art movement with people visiting the region and to educate those who have yet to discover street art. I did not see a lot of illegal graffiti around Dubai, by the way.

It is really nice to see that many big names in one tiny place.

Supposedly there will be more works added through the years.  I am curious to know who they’ll catch next. 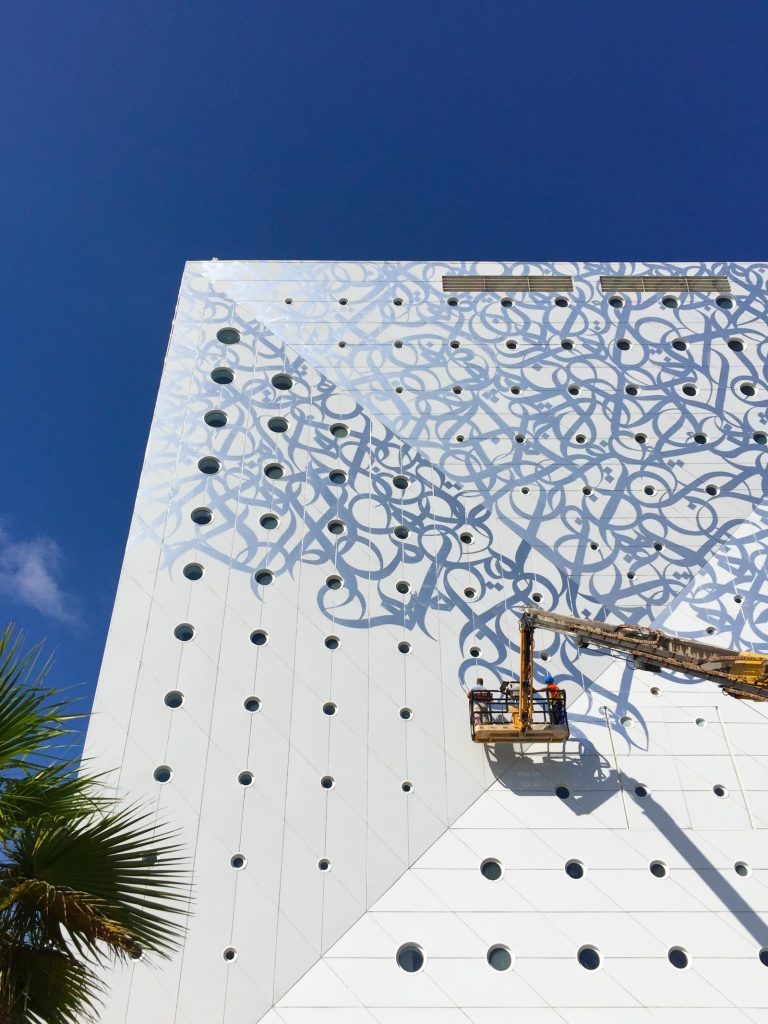 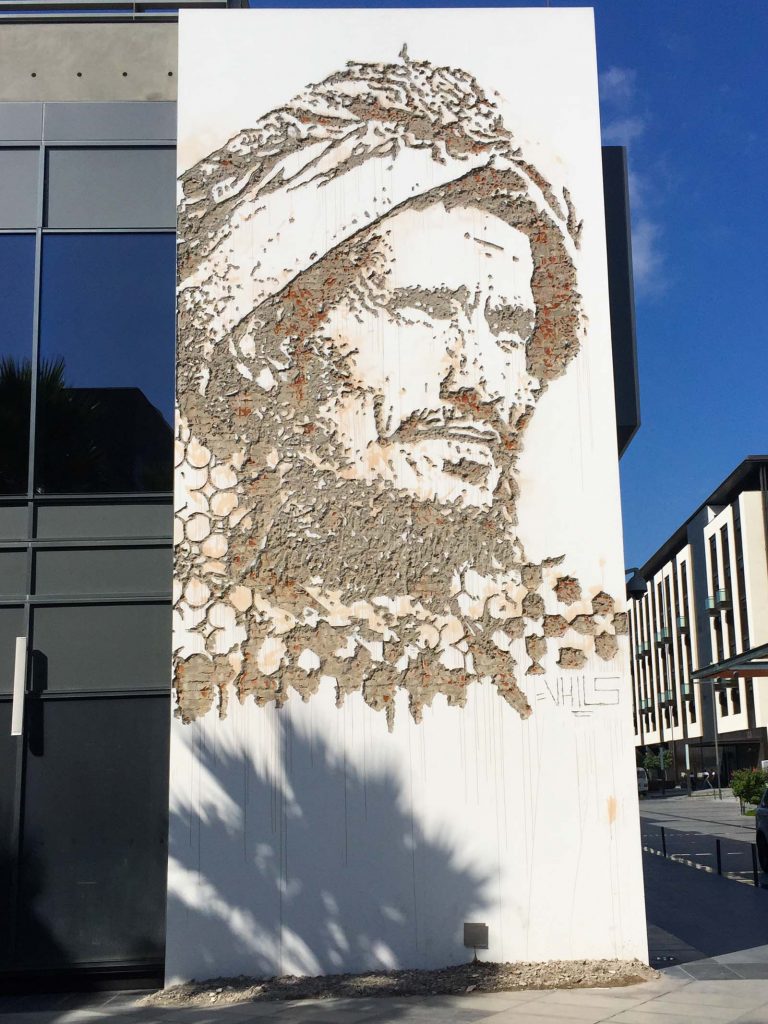 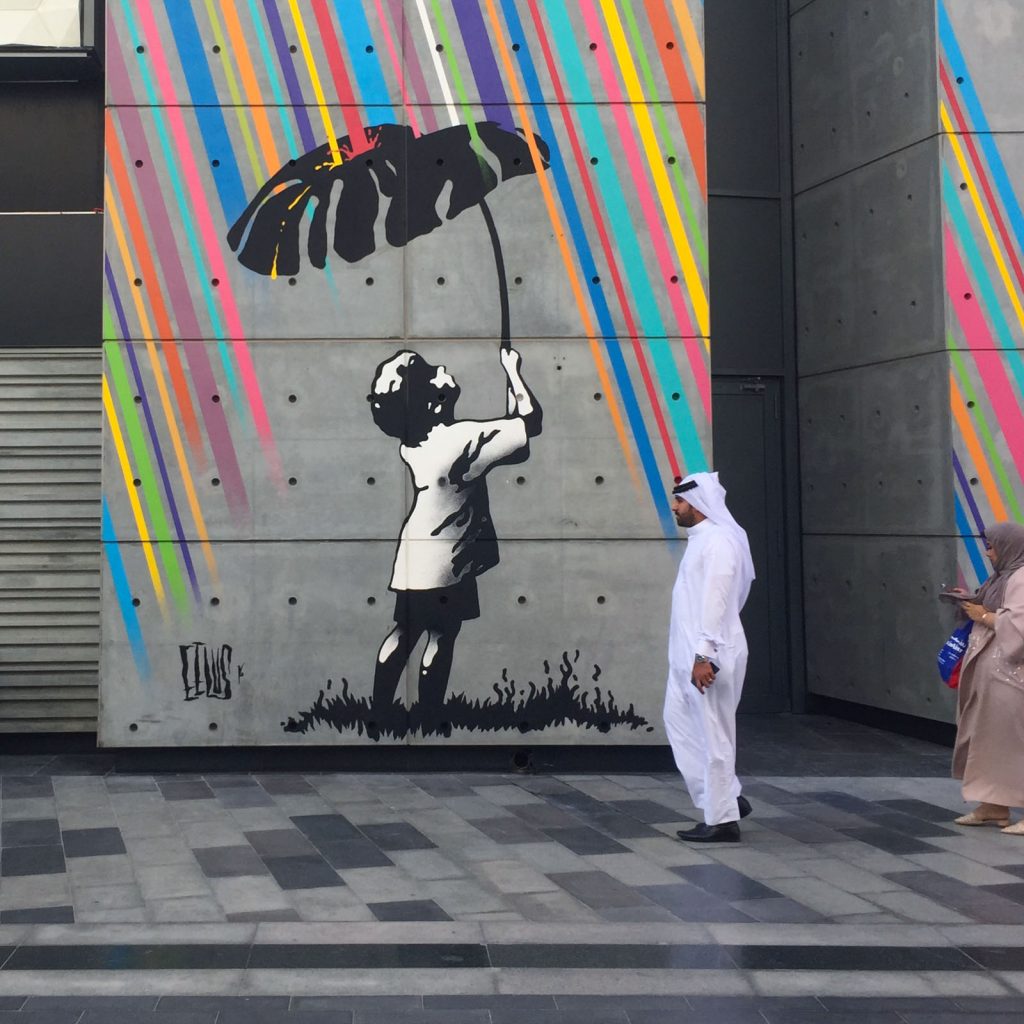 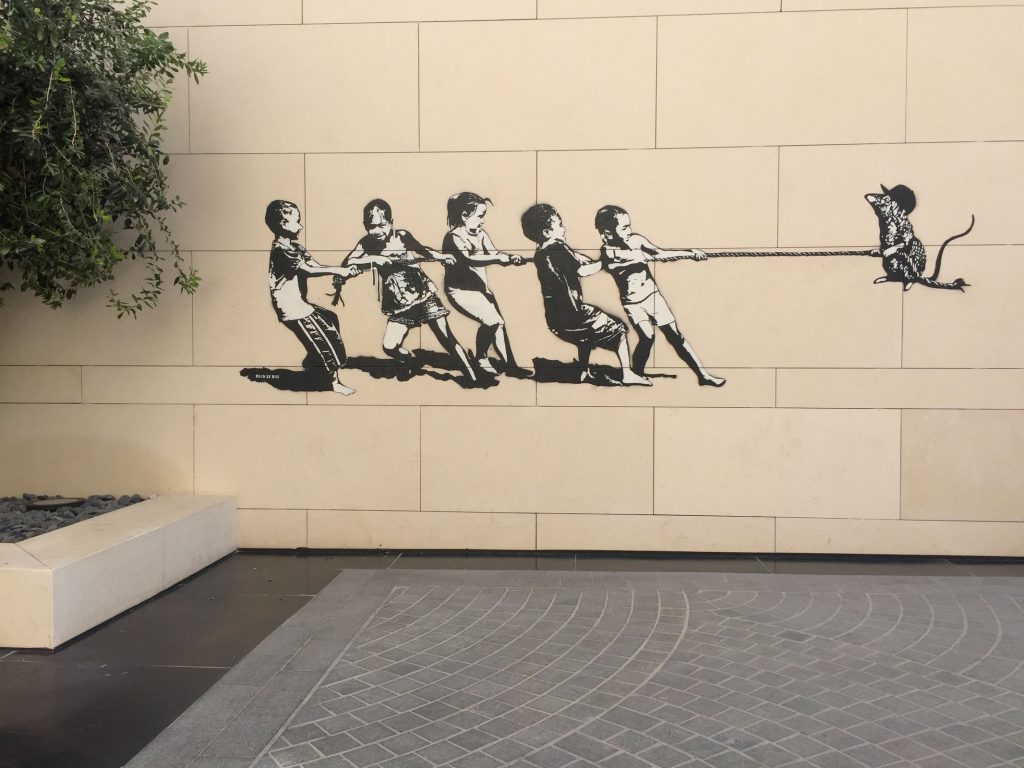 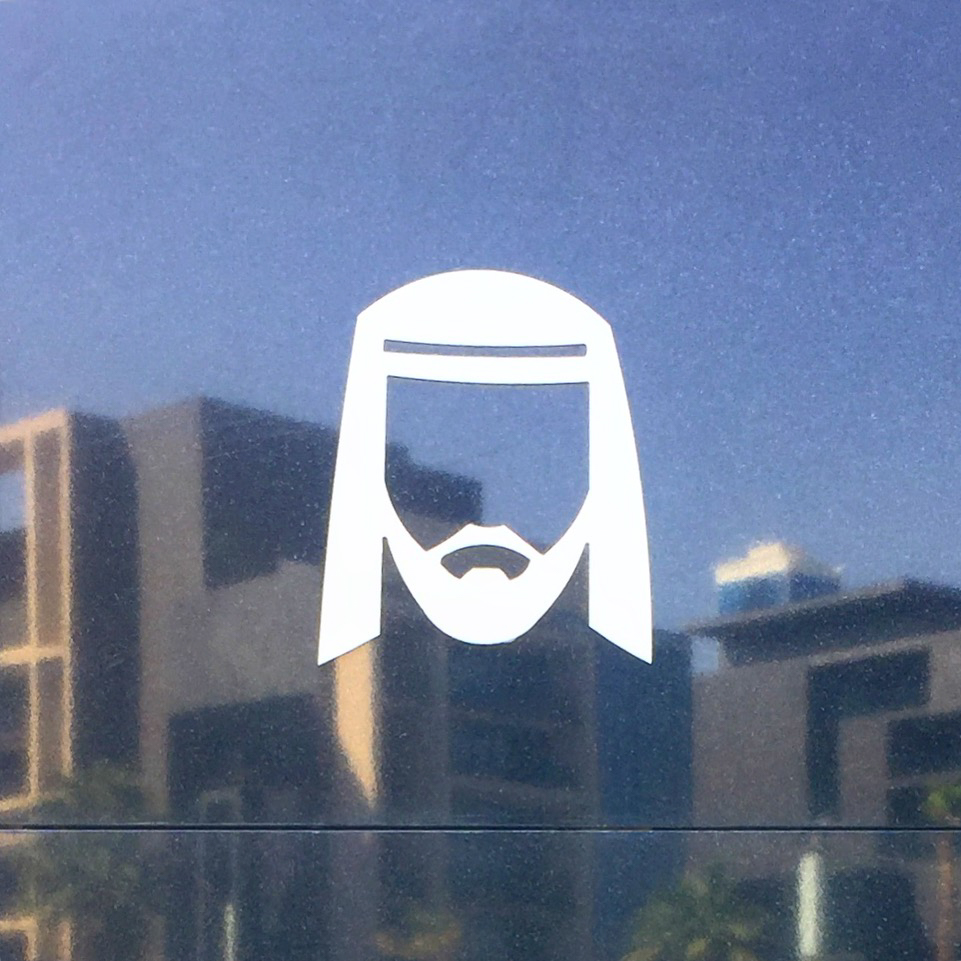 I like the simplicity of the pictogram and the reflection of the surroundings on this male entrance to the City Walk 2 Mosque.

We spent our afternoon around a skiing slope! Yes, Dubai has an indoor ski slope with actual snow, lifts, skiers etc in a -4C area at the Mall of the Emirates. Strange. That’s all i can say. It looks quite real, except for everyone wearing the same rented outfit, it could be up in the mountains, but it’s one more of those things made by and for people with too much money on their hands. On the other hand, it’s like an amusement park. Since those are not my cup of tea, that’s probably why i find Dubai Ski strange… More about me than them 😉

Luckily, we ended the day with an amazing sunset at the Jumeirah Public Beach. The water is so transparent and magically mint green in all of it’s different shades.

The kind of sea and waves i can look at forever.

From the beach, the view from the Burj Al Arab is very nice. It’s the only 7 star hotel in the world, so you can only get closer with a hotel pass or a restaurant reservation. Not quite my budget… The sunset was at least worth 5 stars. 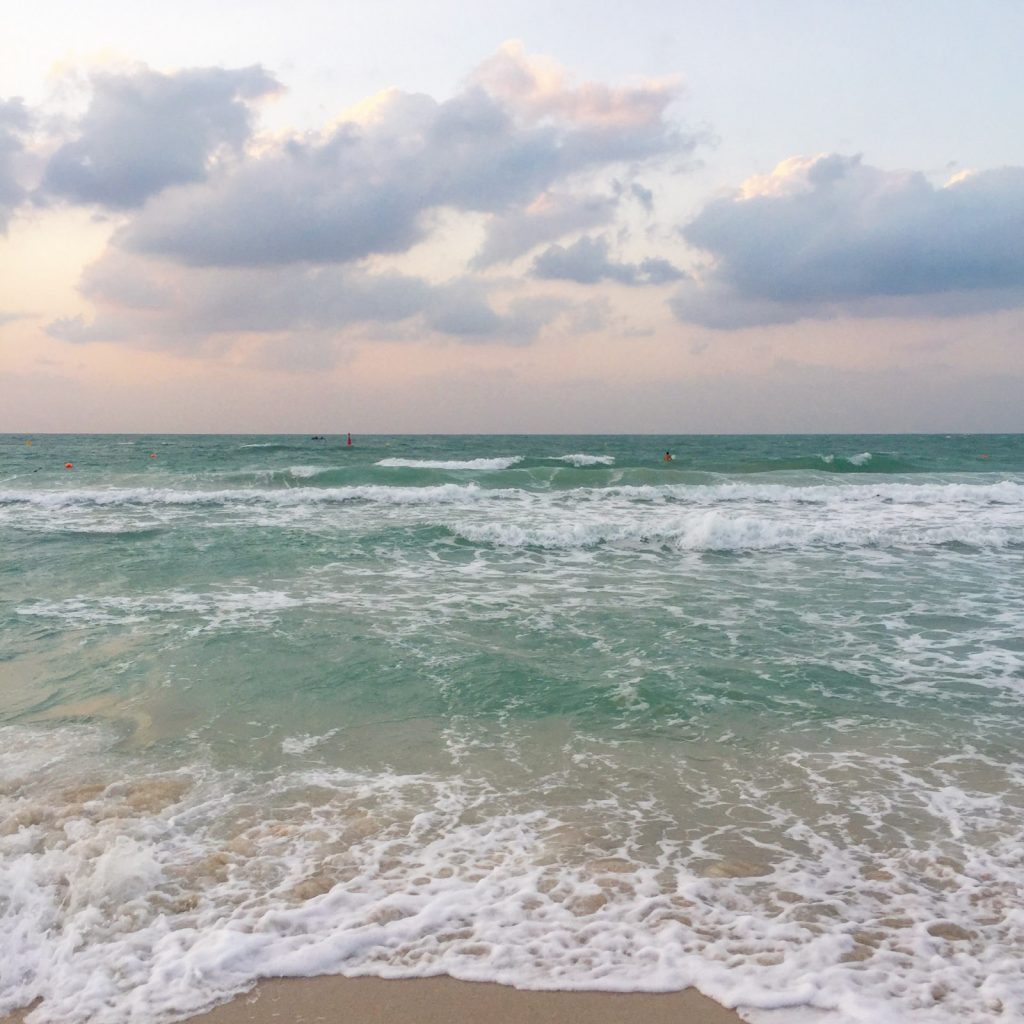 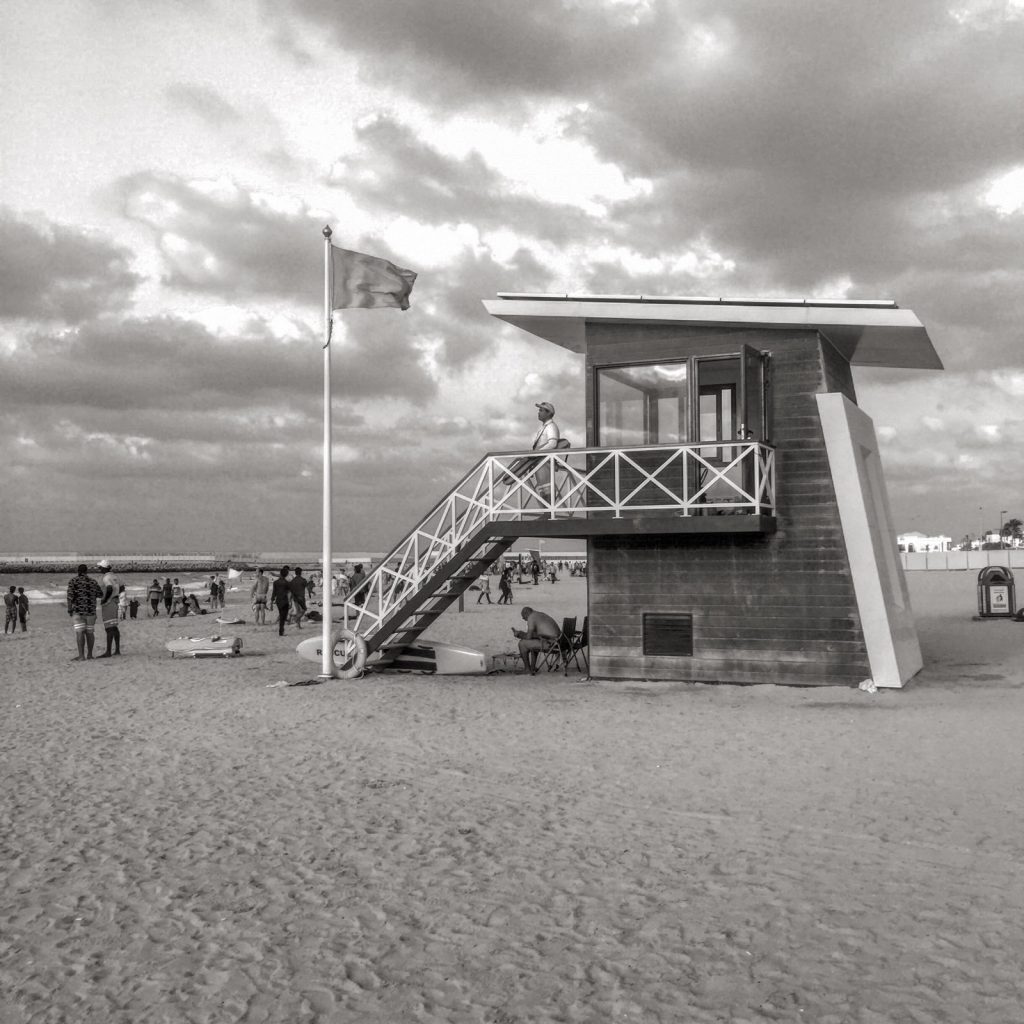 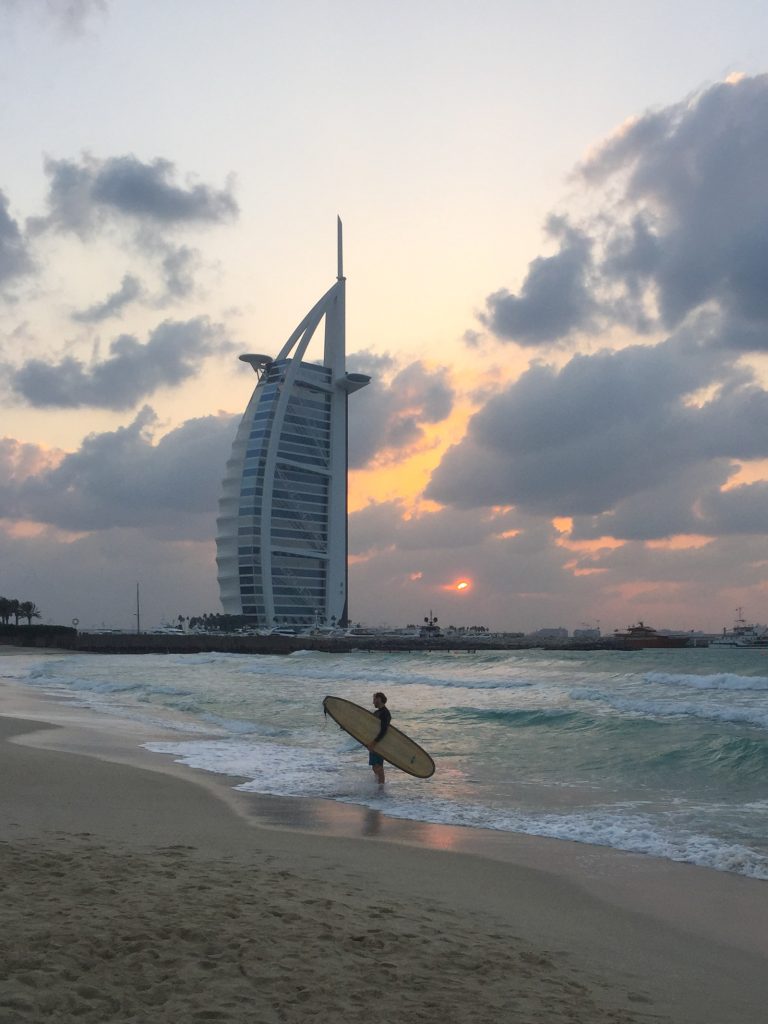 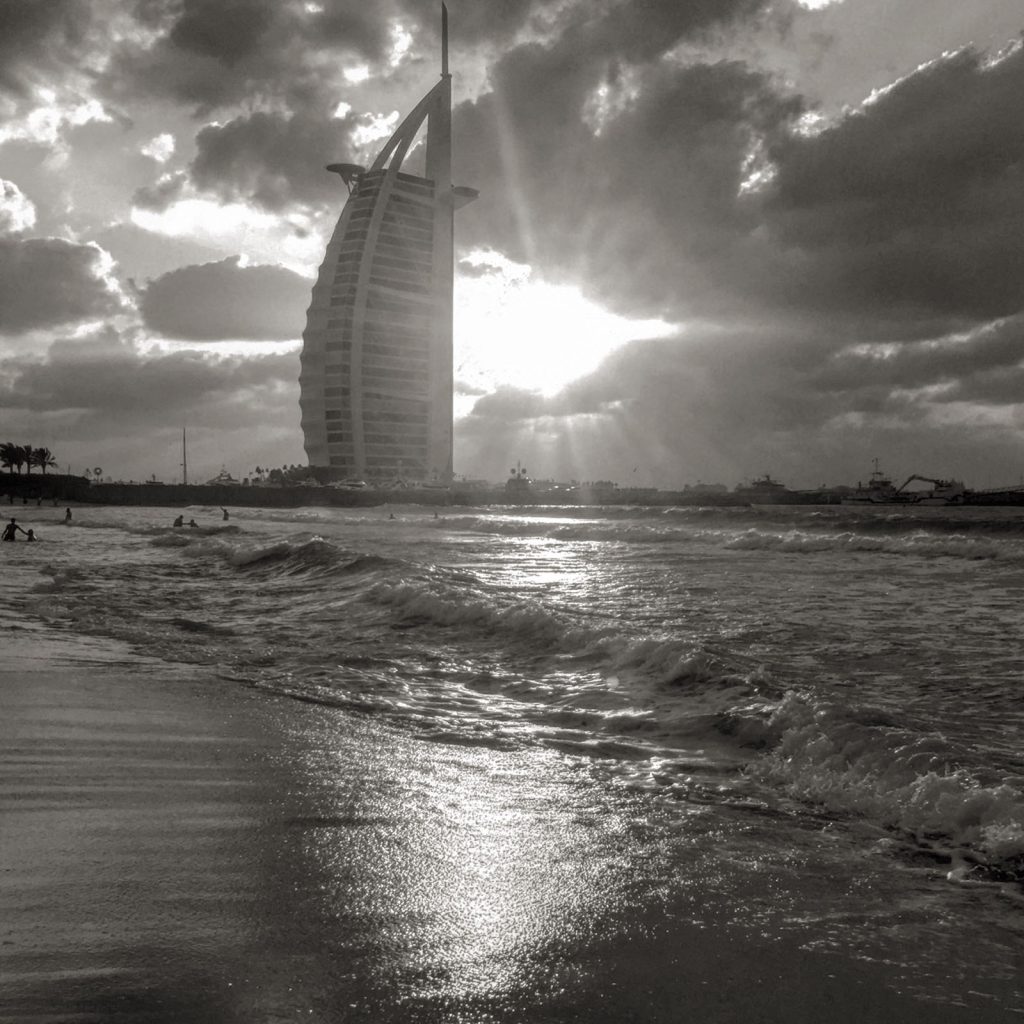 The Burj Al Arab Jumeirah seen from the beach.

Last day in Dubai. When i have enough time visiting somewhere, i like to go back to a favorite spot the last day. So that’s what we planned.

We started off the day with a visit of the Jumeirah Mosque. They offer a guided tour to non muslims with the idea of ‘open doors, open mind’ that i really like. Well… we were late! Mixed up start and end date, really silly. But they let us in for a quick look anyhow. There was a lovely (British) lady still talking to some people who had all those questions about Islam and what rules there are and not. She was very open to all the questions and just in those thirty minutes we were there, we got totally absorbed by her stories and answers.

I would definitely go back for a full visit and recommend it to anyone.

Hearing about Islam from someone who comes from another culture/religion and is very happy and consequent about her choice, is always refreshing and interesting. 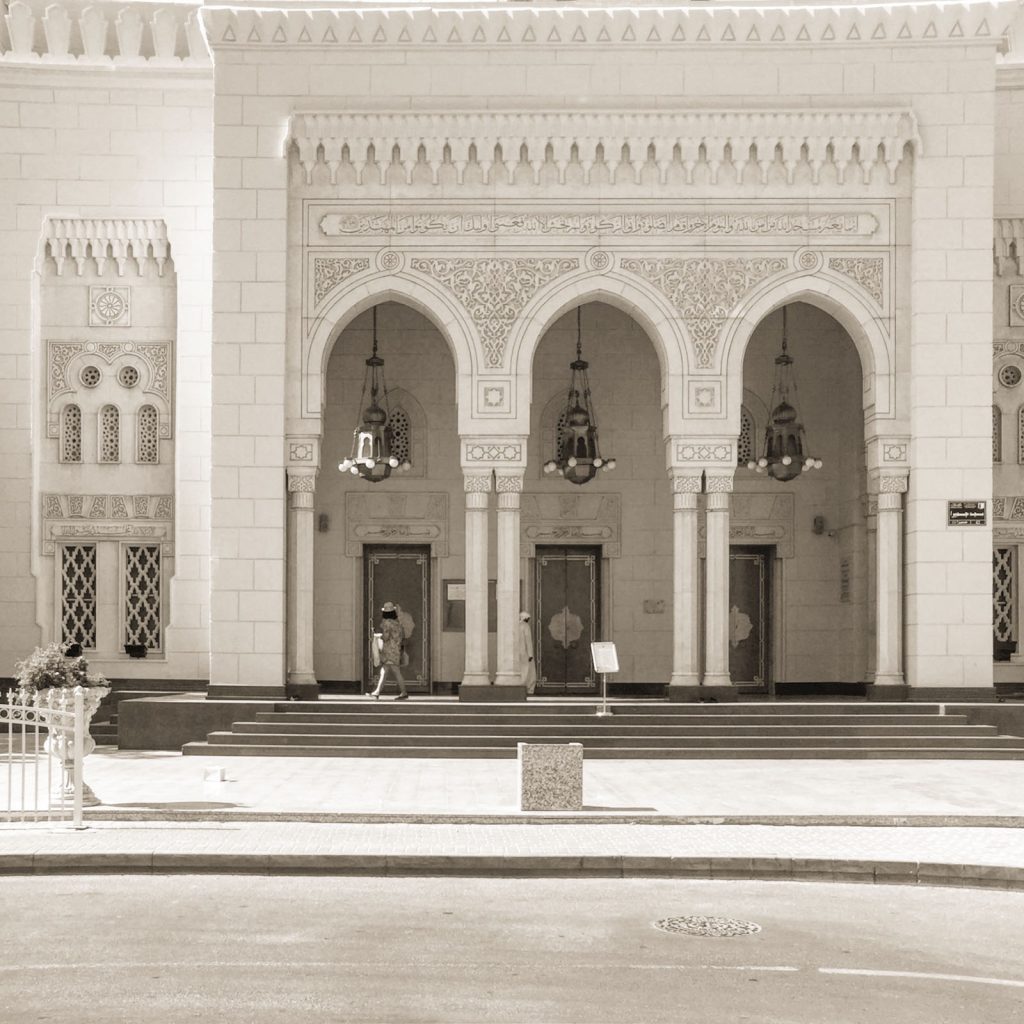 The place we wanted to go back to was the area of Bur Dubai. It’s wonderful to get lost in the little streets and watch all the activity on the river. That area felt most real and authentic, full of life and wonders to discover.

We found two beautiful Mosques we hadn’t seen before and ended up having lunch again at the Creekside cafe. 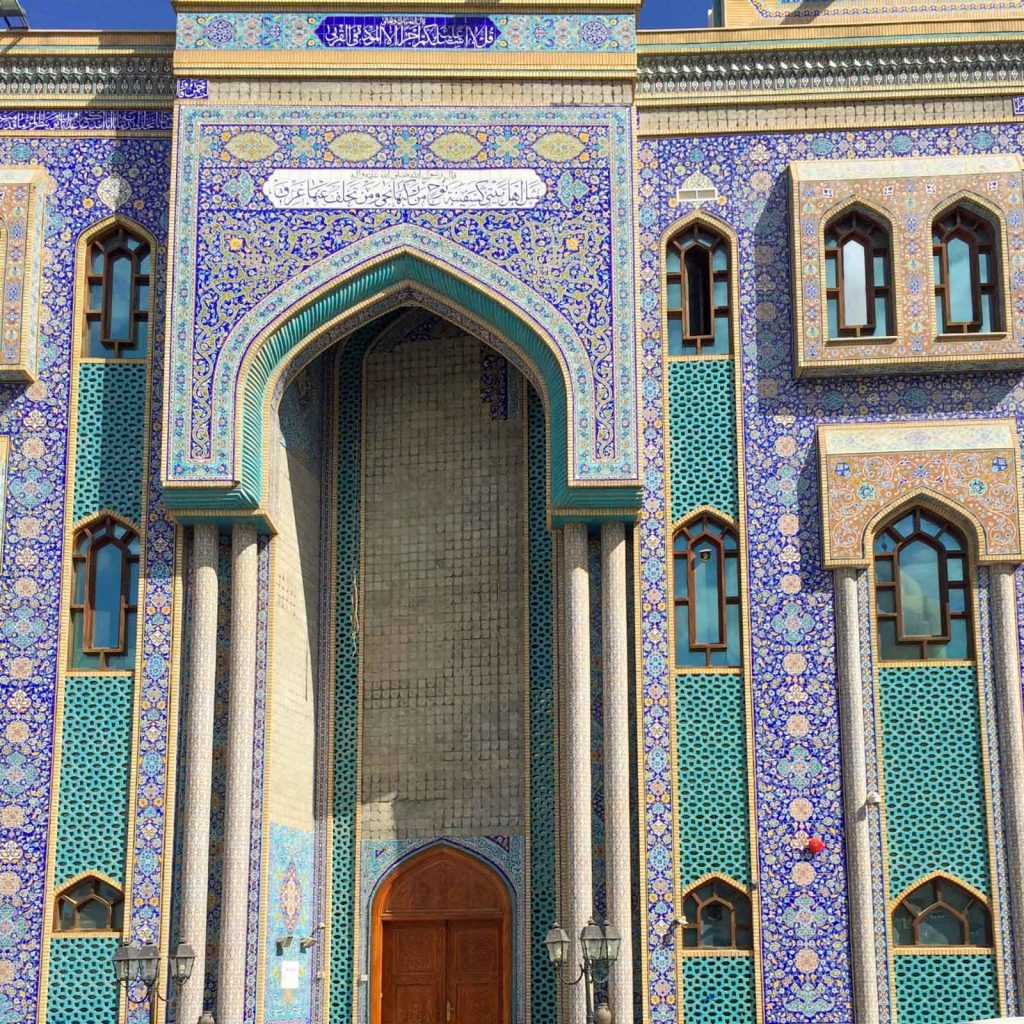 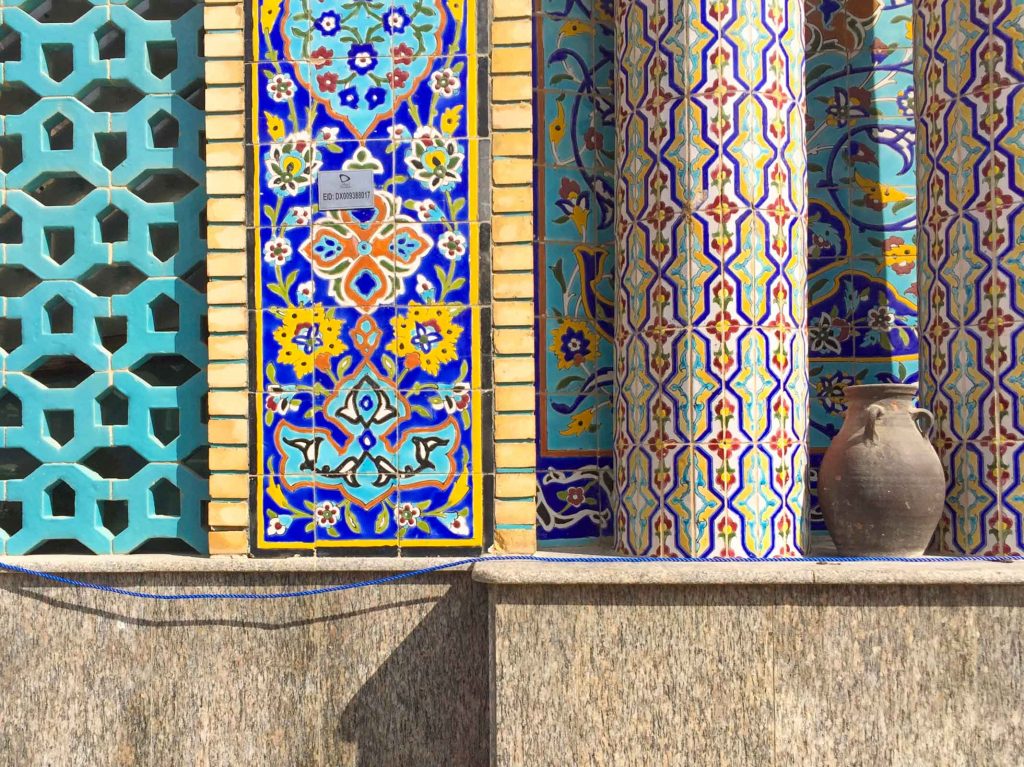 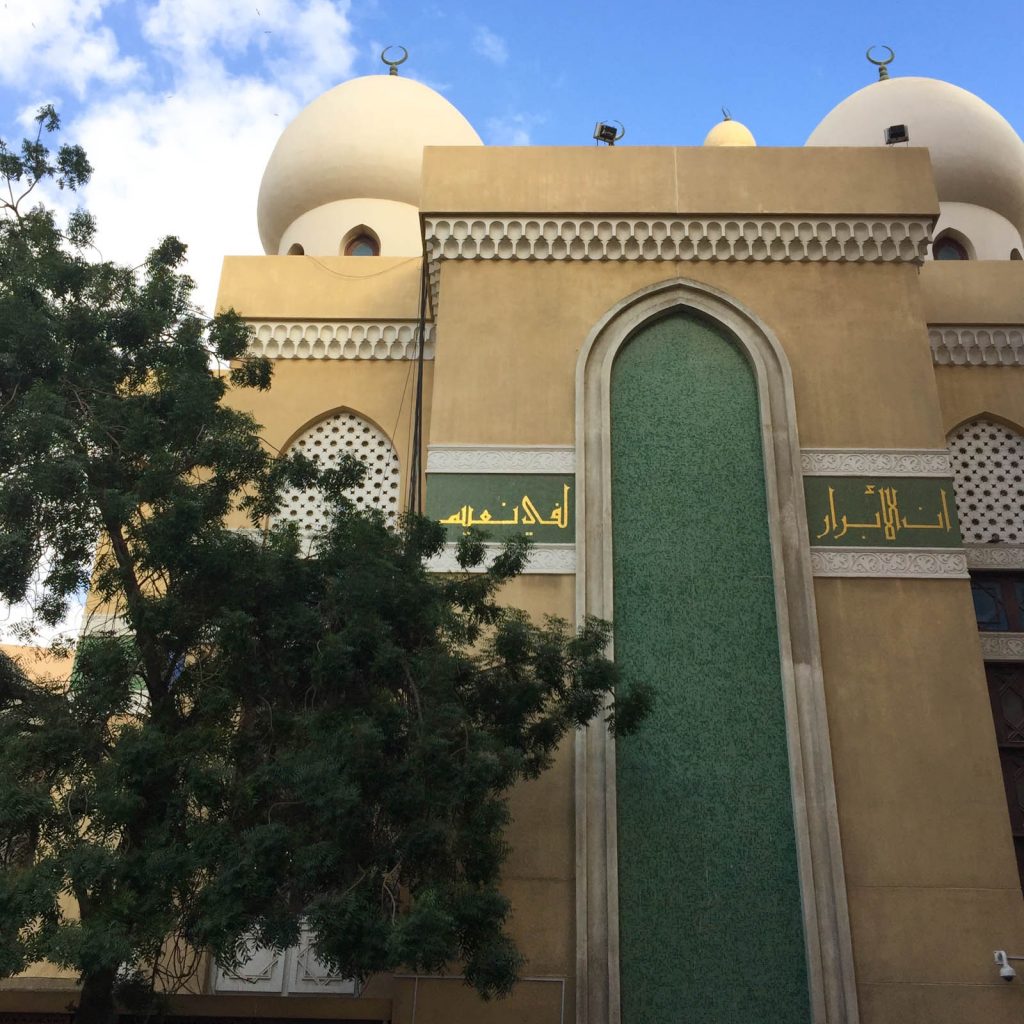 We managed to get to the Observatory for drinks and regretted not going earlier. The view from the 52nd floor overlooking the Marinaon one side and the Palm Jumeirah on the other is quite something. Getting there after sunset limited the view to brightly lit hotels and signs, which was really too bad. Nice service and a (reduced) choice of tasty drinks and finger food make it a perfect end of the day place to be. But i’d suggest making it before sunset!

There is a whole particular legislation around alcohol in Dubai. Legally only licenced venues attached to hotels are allowed to serve alcohol, to non muslims only. During specific holidays, alcohol may not be purchased or served and the holidays begin at sunset, the day prior to the holiday. So if you’re up for a lot of drinking, figure out when those holidays are and book accordingly…

So, the story short: no reading books at the pool sipping cocktails. But a trip full of surprises.

And…we decided to take a trip every year! What’s next?

If you plan a family trip, you can absolutely combine more cultural activities with desert and water adventures and fill an exciting week in no time. 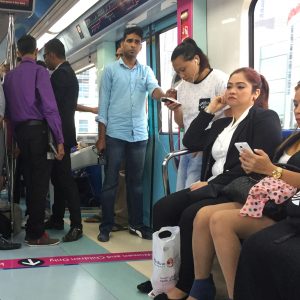 A note on the side on transportation: we used the metro quite a bit. It’s definitely the cheapest mean of transportation, but it doesn’t get you everywhere. There is mainly one straight line. It works fine to go from the Marina to the Burj Khalifa, Bur Dubai and Deira. A fun fact you see on the pic: there’s an area for women and children only, marked by a big pink line.

Uber is widely used in Dubai so those get you everywhere at any time. And regular taxis are all around too.

This site uses Akismet to reduce spam. Learn how your comment data is processed.